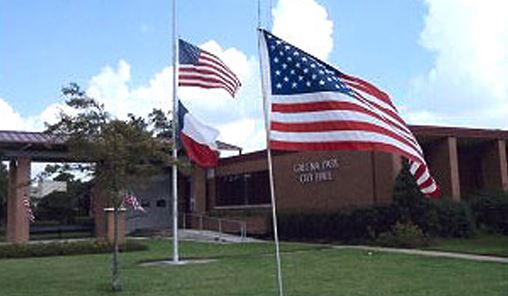 The City of Galena Park was incorporated on September 21, 1935 and is located in Harris County on the north bank of the Houston Ship Channel (formerly Buffalo Bayou) just east of the Houston City limits. The City is located in the Ezekiel Thomas Survey and has a population of 10,592. The first settler in the area was Ezekiel Thomas of South Carolina, who received a grant on one league of land from the Mexican government in 1824 as one of Stephen F. Austin's colonists. In 1833, Issac Batterson and his family settled in the area and named the settlement "Clinton." Batterson subsequently purchased 1 000 acres from the Ezekiel Thomas estate, a tract located in the center of present day Galena Park. For almost 100 years, the settlement was known as Clinton, and in 1928, when the U.S Post Office Department refused to grant the town a post office because another post office bearing the name Clinton already existed in Texas, the name of the town was changed to Galena Park, after the Galena-Signal Oil Company, the town's leading industry at the time.

Galena Park's main claim to historical fame lies in the fact that on April 19th, 1836, General Sam Houston used the floor of the Batterson house for the purpose of making rafts with which to ferry his army across the rain-swollen Bufflao Bayou. Houston also left some 250 soldiers, most of whom were ill in the camp near the Batterson House. After crossing the bayou, Houston defeated the Mexicans under General Santa Anna in the battle of San Jacinto and won independence for Texas.

The City of Galena Park has prospered since it's incorporation in 1935, growing in populations from 1,500 to 10,592. It is six square miles surrounded by other jurisdictions. It has had efficient governmental administration through the years. It has an excellent Police force and a very capable Fire Department. The City owns and maintains it's own water and sewage disposal facilities. It has an olympic size swimming pool, two recreational facilities, a public library and numerous parks.